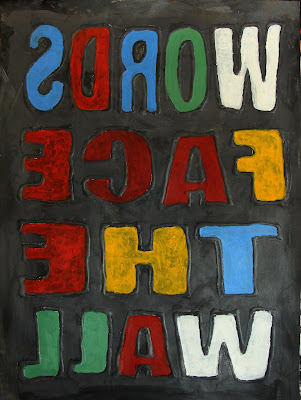 A study for another work in my text-art series, now appropriated as an homage to the sometimes droll conceptual work of the late John Baldessari.

I am using the following color classification, loosely based on the sequences of color in the color spectrum:

In terms of generativity, you could work with the hash value of the string "Words Face The Wall" (DC28A134DEFC289CA6B01B3ACA6D162D). The unique values in the string are:

...on which various attributes can be assigned, such as color, material, etc, and it need not be text-based. This is the process I used in my Hash Art series.

This is no different from using scales or other rules or rudiments in music, and a good example of borrowing a system from another domain as a metaphorical framework.

Initially, the work was inspired by this sign on a scanner at the library. It is frivolous in some ways, or even "cartoonish", but essentially uses self-reference as a creative springboard. 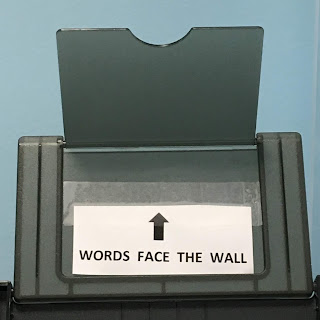 Here are a few digital renderings of the same idea with Photoshop treatments, which in some ways are more true to concept, and could be generative for a series of works using the artifacts inherent in the printing process. 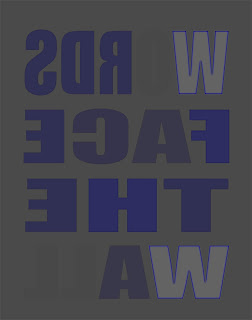 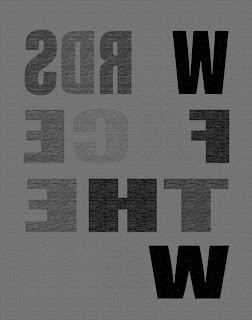 A few of my axioms on working in series:

1844. In creative activities, working in series is more productive than conducting experiments. Ultimately, whatever usable results are derived from experiments get incorporated into existing series.

1405. There are two basic ways to add cohesion to creativity: 1) create the work, then serialize; and, 2) create similar pieces in an existing series. This also works in music where you can compose first, then add to a collection (album) or define the framework for the album and fill it in accordingly.

1133. All creative people should keep lists (and work in series). If creative work is in the flow of your life, why not begin the serial process and follow it through? A natural branching occurs the longer you do it. But the objective is not only to gather and glean, but to also cultivate and prune the list, and give it power to be generative.

1111. If a piece doesn't fit in a series, put it in another one until it does. Styles have the flexibility to be co-adaptive, e.g. photographing unfinished paintings as a series.

0937. If you are an 'idea person', ideas are in the flow of your life, and you need to learn how to deal with that as a force pushing against you. Every new idea pushes all the other ones away, or sometimes obscures them. The first thing you need to do is tether it to something else: a series, collection, category etc. such that it doesn't disappear. Ideally, an idea should take on some type of shape within a short period of time.