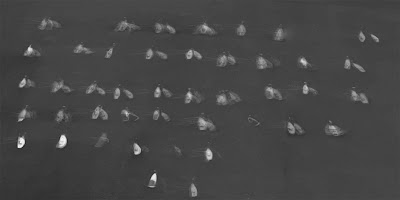 An "aerial" snapshot ("screenshot") taken over Monroe Harbor in Chicago, taken through Google Maps. Either the movement of the boats and/or the movement of the earth created "trails." The boats look as if they are sunken, or look like organisms of some kind, or fishing tackle.

0859. Photography is still understood as something that happens inside a camera. In the future, 'photography' might simply involve selecting and cropping from existing high-res images, as can be done now with satellite or drone cameras. Instead of looking down, the cameras will take pictures of city skylines for example, and you could just zoom in a crop a section. Is that not the same thing that a photographer does with a camera? (12/2014)