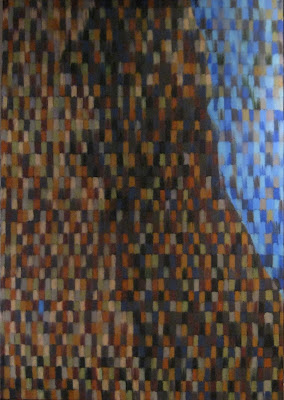 Created in commemoration of the 100th anniversary of the Burnham Plan For Chicago, the grid-based process is in self-reference to the grid-based street layout of the city.


From Dream cities: seven urban ideas that shape the world:

Burnham went on to the biggest plan of his career: a regional city plan for his hometown, Chicago, completed in 1909, with Edward Bennett. As depicted in impressive watercolor renderings commissioned from the artist Jules Guerin, the city would be centered on a huge plaza, lined with white colonnaded buildings, all focused on a circular city hall topped with a truly massive and tall dome. From the plaza, diagonal avenues departed, forming a diamond matrix cutting through the street grid before meeting a giant orbital parkway. The plan extended more than 60 miles from the city center, nearly encircling it with parks and greenbelts. The entire Lake Michigan shoreline was projected as parks, with a harbor centered on the civic plaza protected by breakwaters...."

1196. Analog is the metaphorical 'desire path' across the digital grid. Even zooming in to the most minute levels, there will be a curve overlaying a jagged edge.

0567. One cannot be a consummate artist without living in or frequently visiting large cities and neighborhoods. Small towns and villages tend to promote arts and crafts rather than cutting-edge art. The vanguard is about challenging ourselves intellectually. People might be indifferent to cerebral elements of art, but it is imperative that it be vivified in an urban setting, which generally tends to be more tolerant or accepting of social extremes or experimentation. Decoration is not really concerned with intent or irony, two of the more important elements of the avant-garde in the purest sense.

0473. Absolute freedom is an oxymoron. As you break boundaries to achieve freedom, you automatically create boundaries. They are a side effect of freedom. Very often freedom can only be obtained by construction of barriers, as they wall-off opposition, allowing the new freedom to exist unencumbered. This is not a bad thing, and is how we create genre; and without genre, everything would be homogeneous and boring. The jazz avant-garde was partly an attempt to break free of the grid of tonal music, but at the same time created a grid of its own. As Charles Mingus once said, "You have to improvise from something--you can't improvise from nothing". Inevitably, you need some type of map eventually, as the mind is wont of them. Even when structure is replaced with Dionysian spirit, we very often find ourselves inside different boundaries based upon exclusion and avoidance of the status quo; and find ourselves again ensnared by rules, even when the whole point was to get rid of the rules.

0428. Researchers have discovered that suburban sprawl is causing obesity and other health problems, as people are confined to cars. How depressing to go from house to garage to car and never have the opportunity and pleasure to walk alone to somewhere interesting.

0057. Developing new urban areas can be thought of a generative process, whereby one new presence in the community generates a whole new set of possibilities.

0048. America is built on the idea of ambition and innovation. Ironically it may seem that those that conform to the conventions of the American Dream have a better chance of prosperity. But the 'Dream' is still a large part of that idea. (The moral: Failure is a better story than giving up.) (1/2003)