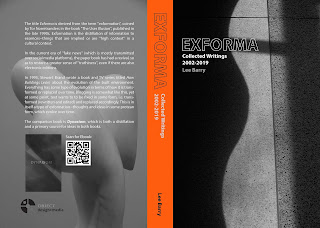 Exforma: Collected Writings (2002-2019) combines, in part, texts published originally on his electronic diary Musings on Music Mostly, and includes the updated and edited versions from older drafts and manuscript of a book titled Cusp--The Beauty of the Boundary, on the subject of boundaries as a metaphor in the arts, with essays The Threshold of 1966, The Music of Language, The Music of Place and Photographism, Musicism and New Dialects for the Arts. The writings in 2002, were derived from the larger pre-existing chronological artist and studio diaries, used primarily for lyric ideas and musings about various topics of interest. After 9/11, intellectual debate was amplified on issues of anthropology, meta-geography, politics..., and the Internet was developing into a stage for these debates, that then evolved into social media as we know it today. Blogs began in 2004, which let writers experiment with ideas and share them with a wider public. This book is a distillation of some of those ideas.