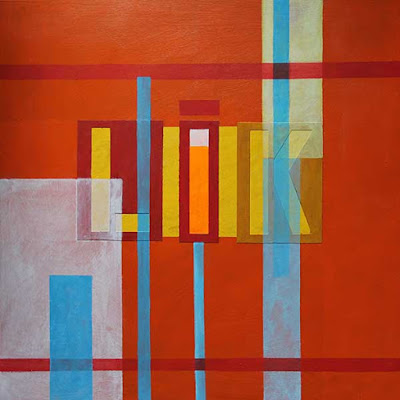 "LIK" as the urban slang or textionary version of "like", done in orange and Day-Glo for a synesthetic effect, evincing "flavors" and "fragrances" of citrus, strawberry, and blueberry. I wanted to make something that was redolent of orange and vanilla ice cream, like a Dreamsicle. (The study for the piece incorporates a popsicle stick.) The piece uses a graphic design approach, focusing on "layout" and using paint color swatches for the color palette. The work also has its own Facebook page.

"...contemporary cognitive science has presented a vast amount of evidence that mental states send and receive ripples of cause and effect across the rest of the body. Think how your mouth might water when you look at a photo of a tasty chocolate cake, or how tense you feel when watching a suspenseful TV drama. Thoughts, feelings, and emotions, whether aimless or deliberate, are a somatic cascade of multiple biological events. And it’s this cascade that art somehow taps into." https://aeon.co/ideas/let-the-soul-dangle-how-mind-wandering-spurs-creativity

"Likes" are in many cases "applauding": a Like as a click is not the same as a Like as an expression of liking a particular kind of music. It has many shades of meaning: Like is a "tone word" in some sense, where the inflection changes the meaning. I find myself liking things as a way to applaud them, which is undeniably a good kind of Like. But in retrospect, I feel my free will of liking has been suppressed. The "me" of twenty years ago wouldn't have "liked" it, yet it would have "clapped." "Clap" is a word that needs the sound that represents, and is louder than an almost inaudible mouse click.