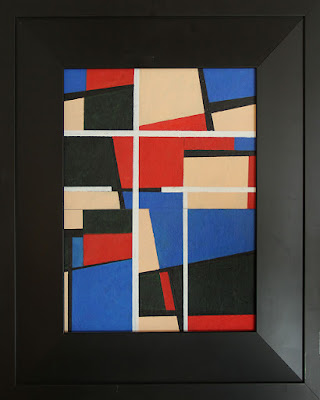 An homage to neoplasticism ("De Stijl") for its centennial.

Like many of my pieces, they begin and end in different places. The original idea was off the working title "Compartments" or "compartmentalization" as a borrowed metaphor from psychology. The original painting was cut into sections, then reassembled. The white stripes were a way to resolve the metaphor of "compartments", but later I realized that the band The White Stripes were deeply into De Stijl, and titled an album after it. This geometric style is something that I believe is "me", a style that I recall doing in childhood and has remained with me since.