A page from my paper diary March 1, 2007, in which I was experimenting with the concept of "The Art Machine", i.e. the creative feedback loop between the disciplines. (I think I had just been to an exhibition of Jeff Wall's photographs). What had inspired me was his cinematographic approach to photography--that it was a "frame capture" of a moment in time. I then had the idea that film stills could be transformed into other media, such as sculpture, then back again in the form of a photograph or other 2D forms. 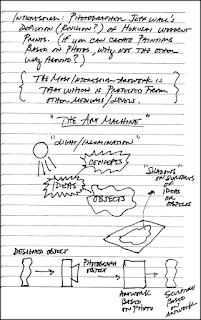 "...they give rise to the situationists' detournement, in which your work is altered or recontextualized to create a meaning that opposes its original intention. They are the moments of distraction when one is engaged in a task, the sudden shifts of attention to something apparently irrelevant or disconnected. They are the final acknowledgment the pataphysician makes that the universe is governed by chance, so the words we speak, the things we do, our exploits and opinions, are the products of an inexplicable swerve." Hugill, Andrew. 'pataphysics: A Useless Guide. , 2015. Print., p.16